Arduino has released their MKR IoT Carrier Sensor Board as a separate board. The board that was originally a part of their starter kit (the Oplá IoT Kit) is now available as a standalone board. The move comes as a response to the requests made by the Arduino community. 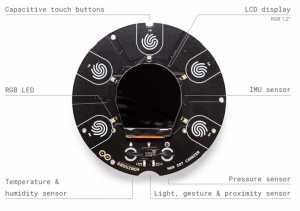 The MKR IoT Board has quite a few built-in sensors and actuators like temperature, humidity, pressure, gesture and proximity, and RGBC light sensors, along with a colored OLED display. Prototyping becomes hassle free, as there is very little soldering required for connecting the various modules and components or wiring them to each other.

With seamless connection to the other MKR boards, the carrier board can be used as LoRa, NB-IoT, Wifi or GSM compatible device. Embedded OLED display, five capacitive touch buttons and RGB LED each makes the user interface building effortless. 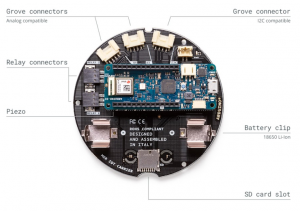 The integrated sensors makes mapping the surrounding area around the carrier board easy. If the need arises for additional data to be gathered the Grove sensors can be easily interfaced to the carrier board.

Priced at $57.60, the board is available for sale on the official Arduino store, along with all the necessary datasheets, pin-outs, and schematics.